There’s nothing like a Grateful Dead concert.” Those old bumper stickers have seen a lot of mileage over the years. It was in the spirit of creating in the moment - the live concert experience, and a love of ‘The Great American Songbook’ that inspired the founding members of Dark Hollow to set out on their journey back in 1996. They’ve sought to carry on the Dead’s live tradition and tap into the collective band/crowd relationship that transforms ordinary moments into magic.

Dark Hollow is now entering their 25th year paying tribute to the music of the Grateful Dead. Known for their dynamic performances, the band crafts songs from the extensive Dead family catalog to create unique concert experiences. Their ability to move seamlessly between songs and musical styles enables them to tell a musical story that both honors the original song versions and allows the band members to create new interpretations. And when the special moments arrive, they aim to elevate the room and lift your collective feet off the ground. To tap into the energy between the band and the audience.

The band has performed on bills with Moe., Melvin Seals and Terrapin Flyer, Vince Welnick, New Riders of The Purple Sage, Donna Jean Godchaux, and many more. They have self-produced a variety of standalone and themed concert events, including recent partnerships with Critz Farms and Sharkey’s in Central New York. They have and continue to work with venue promoters to create and participate in unique music events. For booking information, contact booking@darkhollowmusic.com. 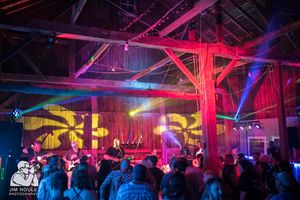